The body responds to a change in its foundation much like a house does. If one side of the foundation sags, the house will sag some, but not always in a direct proportional relationship to the amount of sag in the foundation. In the beginning the sag may even go unnoticed. The structure of the house, the studs, beams and plywood sheeting tend to fight the sag, until the gravitational force overcomes the strength of the structure. 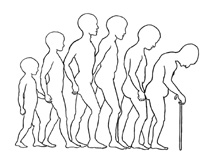 While we are young, our muscles are exercised regularly and they are strong and flexible. Strong muscles generally protect the body’s connective tissues and joints. The “structure” is strong and can resist the gravitational force. Typically with age, people become more sedentary, muscles become weaker and therefore protect our skeletal system less. The effects of the gravitational force become more pronounced as the weakened muscles work harder to maintain the body as upright as possible. The effects of hyperpronation become more significant.

All of these changes are visible. Some are less pronounced than others, but to the experienced observer, are equally obvious.

To fully evaluate a patient’s response to hyperpronation, it is important to observe the patient while standing and walking.

In terms of subjective symptoms, hyperpronation will typically manifest itself as musculoskeletal pain, weakness and an increased propensity for musculoskeletal injuries. Low back pain is the most common complaint and by some statistics affect 80% of Americans. Headaches, neck and shoulder pain are frequent complaints. Common complaints in the lower extremities are foot and knee pain, plantar fasciitis and shin splints, blisters and calluses.

Reduction of hyperpronation will have a significant impact on how patients respond to manual therapy for foot, knee, back and neck problems as well as symptoms resulting from spinal misalignment.