The 30/70 Rule has been derived from practical experience. In the early stages of using ground forces underneath the medial column of the foot, it was found that using the full dimension equal to the measured FMD (Subtalar Joint in neutral position) was not practical. In most cases, the patient would reject the sensation and complain about their center of gravity being shifted too far back like they were walking on their heels. Empirical results demonstrated that there was not a one to one correlation between the amount of ground forces applied and the amount of correction realized. For example; if the FMD (elevation of the big toe) was measured to 15 mm and the patient was fitted with a 5 mm (33% of FMD) ground force PCI, patients would often demonstrate a dynamic realignment equivalent to that of statically using 10-12 mm ground forces. In effect, the body accepts a stimulus and reacts by magnifying it. The 30/70 Rule is not a mathematical formula, but illustrates that large ground forces are not required in order to obtain meaningful improvement in posture.

The relationship has not been proven, but it seems rational to assume that the correction is affected by a process of repetitive reminders. The body, in its wisdom, recognizes the reminder as innately correct, and automatically makes the adjustment.

If the PCI suggestion to the body is too severe, the body will react to it in avoidance mode by causing the foot to slide laterally off the medial ground force section of the PCI.

The concept of small repetitive forces used to impact body or mind behavior is not new. It is well recognized in both psychology and physiology.

This is the reason why we do not apply ground forces to the full extent of the measured FMD. The experience would be very uncomfortable, and not surprisingly, tactile kinesthetic feedback would cause the foot to avoid the situation by twisting off the ground forces. This is also the reason we do not offer ground forces exceeding 9.0 mm

It also follows from the 30/70 rule that there is a diminishing return as the ground forces increase. The first 3.5 mm contributes more to posture change than does the next 3.5 mm etc. For that reason, if it has been established that the patient would optimally benefit from using a 6.0 mm ground force, but the patient has some shoes that will only accommodate 3.5 mm, the patient is better off switching between 6.0 mm and 3.5 mm than not wearing insoles in the shoes that will only accommodate 3.5 mm. A less optimal alternative, is to use 3.5 mm in all the shoes. 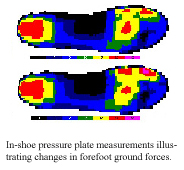 A ground force is an amount of force applied under the foot. The magnitude of the force can be altered by building the ground up to the foot (increased) or making an indentation under the foot (decreased).

Negative forces are sometimes applied to bone spurs, by building up the area surrounding the bone spur and therefore reducing the ground forces affecting it.